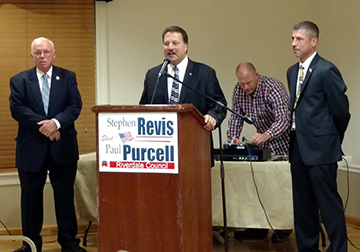 The Republican Nominees for Borough Council, Councilman Steve Revis and newcomer Paul Purcell, held a meet-and-greet for Riverdale residents at the Riverdale Community Center on Thursday night. Despite the inclement weather, dozens of residents came out to hear what they had to say. They were joined by a several Republican dignitaries including Morris County Freeholders, Tom Mastrangelo (no relation) and Doug Cabana, as well as former State Assemblyman and current Bergen County Republican Organization Chair, Paul DiGaetano. Riverdale Councilman Matt Oswald and Dave Desai were also present to give their support and endorsements for the candidates.

After about an hour of casual conversation with the candidates over wine and assorted cheese, the candidates were introduced by Mayor Paul Carelli, beginning with Paul Purcell.

Though a newcomer to politics, Paul is no strangers to civil service. Born and raised in New Jersey, this former active-duty Marine was intent on becoming a NJ State Trooper. However, what was supposed to be a temporary job to pay the bills until he could take his Civil Service test, lead to a senior management position with what is now a Fortune 22 company. He spoke of his desire to follow in his father’s footsteps, Alan Purcell, who was a long-standing and highly-respected Councilman in Wayne before retiring a few years ago. Alan was known for his mantra “Make it better than you found it.”, values he passed on to his children. He was also kno

wn for his efforts for flood mitigation, an area which Paul proclaimed would be one of his top priorities once elected. He is also very active a Veteran Service Organization and will ensure that the voices of Riverdale veterans are heard. Paul is an active member of the community and has been a both a Division Supervisor and Coach in the Riverdale Soccer Association. He was joined by his wife Catrina and together they have a son currently attending Riverdale School.

Councilman Revis was up next and needed little introduction. Steve served on the Riverdale Board of Education for 29 years, most of which as Board President, before moving on to become a Councilman three years ago. He and his wife Jean, a past Riverdale PTA President and current President of the New Jersey State Federation of Women’s Clubs, have lived in Riverdale for 35 years. They raised 4 children who, now grown, are carrying on the Revis tradition having roles in education, recreation, law enforcement and health services. While addressing the crowd, Steve focused on the cooperative atmosphere in the last 10 months with the current administration; a sharp contrast to his first 2 years which were plagued with in-fighting. Citing numerous examples of what can be accomplished when conscientious people work together for the betterment of the community, he cautioned the audience that the wrong decision on November 8th could bring back the dysfunction and animosity of the past. Aside from this, he promised to continue to work to maintain Riverdale’s small town charm that he, Jean, and their children have been committed to for so long.

After their short speeches, mingling reconvened and those who attended had the opportunity to speak one-on-one with the candidates as well as the other dignitaries who attended. These types of events have become a tradition in Riverdale over the last few years and one that we hope will continue.