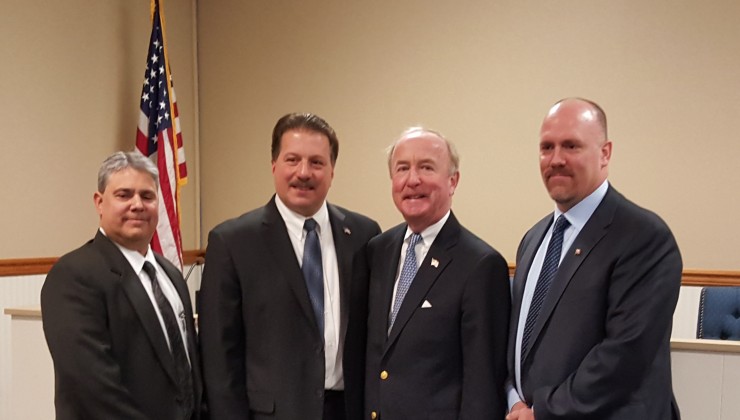 “A New Era in Riverdale”

If you were one of the few not in attendance New Year’s Day;   January 1st 2016 marked an important day for Riverdale.  At approximately 3 PM at Borough Hall the two new “Freshman Councilman” and the new Mayor of Riverdale were sworn into office at the Boroughs annual Reorganization Meeting.

For anyone unaware, the Reorganization Meeting is the first meeting of the year and it is where the elected or re-elected officials take the oath of office, and the government structure for the upcoming year is laid out.

Unlike previous years this year’s meeting was standing room only, spilling out into the hallways, and it wasn’t just residents.  Some of Morris County’s and Riverdale’s esteemed political dignitaries were in attendance, most notably; U.S. Congressman, Rodney P. Frelinghuysen who personally administered the oath of office to Carelli, Desai, and Oswald individually.  (Pictured above)

Also on hand were the following county leaders and former Riverdale Borough representatives:

There was also a special presentation by Sam Dedio (on behalf of former Mayor Michael Dedio).  This included a personalized gavel and note offering congratulations.  see attached letter.

After all were sworn into office, and the new councilmen had taken their seats, Mayor Paul Carelli delivered his 2016 Mayors Address. Eye on Riverdale obtained a copy and has made it available to you here.

The new administration is now underway in Riverdale, and the next official meeting is at Borough Hall on Wednesday, January 13th 2016 at 7:30 pm. All residents are invited.